Notre-Dame de Paris is the cathedral church of the Catholic Archdiocese of Paris. Built from the twelfth century in the vicinity of a previous cathedral and on the site of an earlier pagan temple, Notre Dame was dedicated to Our Lady. Numerous phases of construction and restoration have occurred over the years. Notre Dame is one of the world’s best-known churches. It is recognised as an architectural masterpiece within the UNESCO-listed Banks of the Seine World Heritage Site in Paris. On any day, an average of between 30,000 and 50,000 people visit this church. 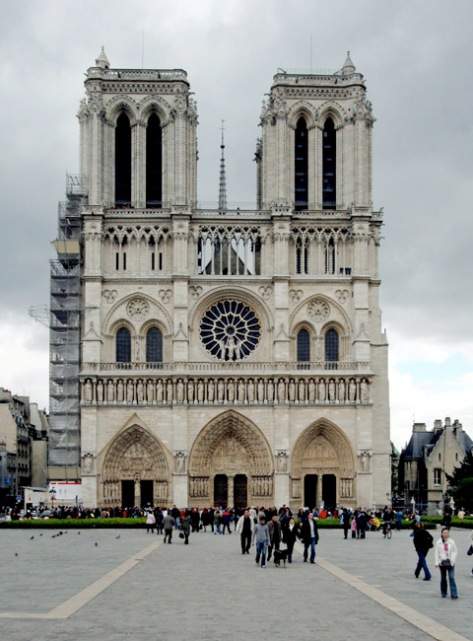 Significance
In the history of the Eucharistic societies established by St Peter Julian Eymard, Notre Dame Cathedral is significant as the seat of the Archdiocese of Paris which first supported Eymard’s work and facilitated the later international expansion of the religious congregations he founded. 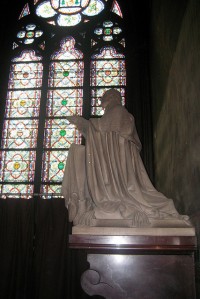 Notre Dame Cathedral is also significant as the burial place of Archbishop Marie-Dominique Auguste Sibour (1792-1857), the leader of the Paris bishops who gave their approval to Eymard on 13 May 1856.

Archbishop Sibour did not live long enough to see the success of what eventually resulted from his decision. He was assassinated by a rogue priest on 3 January 1857, allegedly because of his support for clerical celibacy and the recently proclaimed doctrine of the Immaculate Conception. Sibour is buried in the Chapelle Sainte Madeleine at Notre Dame, where he is also commemorated by a statue.

The wider significance of Notre Dame is to be found in its religious, historical, archaeological, cultural and architectural heritage.

Among the many highlights of this extraordinary building are the highly decorated portals on its western facade, its three magnificent rose windows, its chapels and works of art, and a treasury of sacred ornaments, objects and liturgical plate. The statues and sculptures in and around the building include thirty-seven representations of the Virgin Mary.

Notre Dame’s Great Organ dates back to the fourteenth century and has been associated with many important musical figures. The composer Louis Vierne (1870-1937) was organist from 1900 to 1937 and died at the keyboard.

Notre Dame’s cathedral bells have rung out over Paris for centuries, not only for the services and liturgies of the Catholic Church but also for many of the great events in the history of France. In popular imagination, the bells of Notre Dame are synonymous with the legendary Quasimodo of Victor Hugo’s novel The Hunchback of Notre Dame (1831).

Postscript
During Holy Week on 15 April 2019, a massive fire destroyed the roof and spire of Notre Dame. As the world watched in horror, the great cathedral was consumed by an inferno, leaving the two towers, the flying buttresses, stone walls, and a shell of remnants open to the skies above. Inside the building, rising above the charred piles of fallen timber littering the floor of the nave and sanctuary,  the historic high altar remained intact, surmounted by its magnificent Pietà (Nicolas Coustou, 1723) depicting the dead Christ lying in the arms of his sorrowful mother. The cathedral’s golden altar cross also remained in place, still shining in the dust and darkness of the ruins. At Easter 2019, these are the enduring images of Notre Dame. May they guide all those who seek to rebuild.