The Marian shrine at Laus is a place of reconciliation and conversion, marked by a church that has been built in the vicinity of where numerous apparitions are believed to have been witnessed by a shepherd girl in the late seventeenth century. A Way of the Cross leads to several of the apparition sites in the sanctuary. During summer, all sites are accessible by car or on foot. Some sites may be inaccessible in winter. Laus (pronounced ‘Low’ in French) is a Latin word meaning ‘praise’. 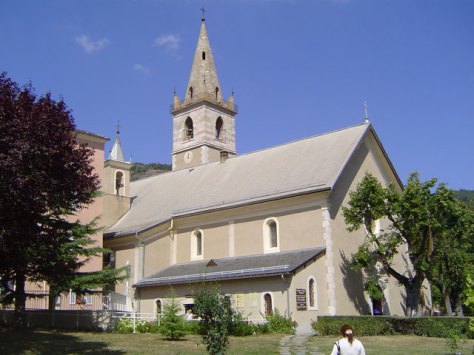 Significance
Following official recognition by the Catholic Church in 2008, Laus is becoming an increasingly important place of religious pilgrimage. The history of Laus as a pilgrimage site is much older, dating back to May 1664 when Our Lady was reported to have made the first of many appearances to Benoite (Benedicta) Rencurel (1647-1718). In a series of events claimed to have been experienced during her lifetime, Rencurel was also said to have received visions of the crucified Christ and of Saint Maurice.

Between 1818 and 1841, the shrine at Laus was under the pastoral care of St Eugene de Mazenod’s Missionary Oblates of Mary Immaculate. Eymard recognised the significance of Laus from an early age. Shortly before making his first communion in 1823 (aged 12), he made a pilgrimage to Laus and declared his love of Mary. It was the first of many pilgrimages that punctuated Eymard’s life. As a 13-year-old, he made a second pilgrimage of sixty kilometres from La Mure to Laus. Here, he met Fr Jean-Joseph Touche (one of de Mazenod’s missionary priests) who became a friend and mentor. Touche urged Eymard to receive communion each week. Eymard journeyed to Laus in 1829, on the eve of joining de Mazenod’s Oblates as a novice. And later, on 23 May 1855, Eymard placed the first drafts of his Constitutions (for the Blessed Sacrament Congregation) on the altar at Laus.

Towards the end of his life, Eymard recognised that Mary had intervened at critical stages in his life: ‘It is the Blessed Virgin that has led me to Our Lord, to weekly Sunday Communion through the “Laus” at 12, from the Society of Mary to that of the Blessed Sacrament.’ [First meditation, The Great Retreat of Rome, 1 February 1865]

In a letter to a travelling member of his Congregation, Fr Edmund Tenaillon SSS, in July 1867, Eymard reflected on the virtues of travel as ‘a good teacher’ and he noted the old maxim that ‘pilgrimages are a help to holiness’. He urged Tenaillon to go to Laus:

It’s the most beautiful and holiest place of pilgrimage in the world after Notre Dame de Loretto.

It’s the pilgrimage place of my youth. I owe everything to it. After you arrive there, pray the litanies of the Blessed Virgin behind the altar for me . . .

Nearly two decades later, Fr Tenaillon became the first postulator of the cause for Eymard’s beatification.

Benoite Rencurel was proclaimed Venerable by Pope Pius IX in 1872. The cause for her beatification, suspended in 1913, was reopened by Pope John Paul II in 1981.

LINKS
Shrine of Our Lady of Laus: Official website (French)