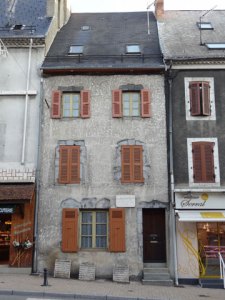 Eymard’s house is now owned by the Blessed Sacrament Congregation. It is a ‘place of hospitality and welcome’ for pilgrims.

Significance
From about 1815, Peter Julian Eymard grew up in the house located at 67 rue du Breuil, La Mure. As a boy, he worked in this house, assisting with his father’s oil pressing business. He lived with his sisters in this house after his parents had died, and towards the end of his life, he returned to this house to spend his final days of illness in the town of his birth and boyhood. He died in a room on the second floor of this house at 2.30 pm on 1 August 1868.

In the mid twentieth century, the future Pope John XXIII (now Blessed) visited Eymard’s house during the period when he was serving as Apostolic Nuncio to France (1944-53). Years later, in his homily at the ceremony of the canonisation of St Peter Julian Eymard on 9 December 1962, Pope John recalled with emotion the experience of seeing with his own eyes ‘the poor bed’ in ‘the humble dwelling where this faithful imitator of Christ gave up his beautiful soul to God’.